CITY council officials are having a re-think over the cycle provision proposed as part of a multi-million pound public realm project for Byres Road in Glasgow’s West End.

Public consultation was carried out earlier this year over plans to redesign the street to make it a more attractive environment for those who live, work and shop in the area. Measures would include widened footways, improved surfaces, reduced street clutter, pavement seating and cycle lanes.

Many cyclists felt the plans did not go far enough because there would be no barrier separating the cycle lanes from traffic. Campaigners protested under the slogan ‘Paint is not Protection.’ 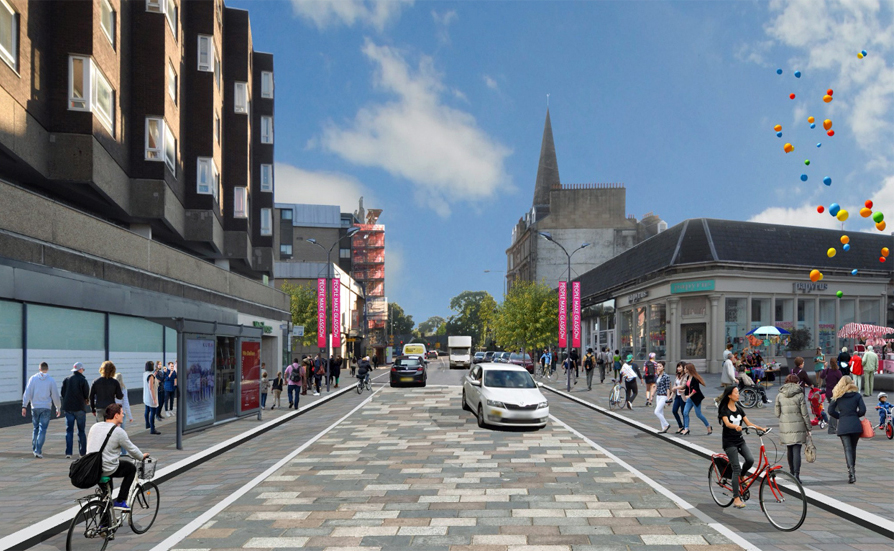 A council report about the consultation confirms that concern about the quality of the proposed cycle infrastructure was the most common issue — it was raised by 43.6 per cent of those who took part.

Just under half of participants (46 per cent) agreed that the proposals would encourage a growth in active travel however a similar number (44 per cent) disagreed.

A report by council officials states: “Council officers have reviewed the consultation findings and are currently considering measures that could be introduced in order to improve the proposed cycle infrastructure and reduce traffic volumes.

“It is important that such measures do not adversely impact on the quality of the pedestrian environment which was identified as a strength of the existing proposals.

“The introduction of design changes will be influenced by further engagement with key stakeholders and completion of additional traffic modelling that will test a number of scenarios that aim to reduce traffic volumes.

“The commitment to extend the consultation and design stage means that construction will be likely to commence autumn 2019.”

Key features of the project — which is funded by the Glasgow City Region City Deal — include:

— Widening and upgrading of footways to make pedestrian movement along the street more relaxed and enjoyable and to reduce the width of crossing points.

— Introduction of step-free crossings to give pedestrians priority at junctions with side streets.

— Enhancing key corners to create distinct and attractive spaces along the street where people can sit and rest.

— Reducing the speed of traffic through the introduction of a 20mph limit.

— Reducing the width of the carriageway to six metres and removing around half of on-street car parking spaces to create additional pedestrian and cycling space.

— Introduction of a one way gyratory system at the southern end of the street to discourage traffic that is using Byres Road as a means of accessing the Clydeside Expressway.

The report on the findings also states: “There was significant support for measures to improve the quality of footways and the wider pedestrian environment -– this reflects the fact that all shoppers, regardless of whether they arrive by car, bus, bike or train, ultimately end up as pedestrians.”