THE final design for the pedestrian bridge that will connect Govan and Partick is now complete.

The bridge will span the Clyde from Water Row in Govan to to an extended quay wall  at Pointhouse Quay next to the Riverside Museum.

The design has changed as the process moved into the detailed/technical stage as a result of stakeholder feedback, but also to make the bridge more capable of opening in windy conditions. In addition, the form of the bridge has been dictated by a number of technical constraints including the need to provide a structure capable of opening to accommodate the movement of large vessels on the river.

The council will this year seek planning permission to build the bridge and undertake procurement allowing construction to start in 2021. It is due to open to the public in 2022.

The structure — designed by Jacobs — will form part of a high-quality active travel route between communities, academic institutions, businesses and visitor attractions on both banks of the river.

While people crossed the river at this location for hundreds of years, they have been unable to do so for almost the entire period since ferry services ended in the 1960s.

On Tuesday 11 February, drop-in events at the Riverside Museum (10am to noon) and Govan Cross Shopping Centre (2 to 4pm) will be held, giving the opportunity to take a virtual reality experience of the bridge.

The bridge will become a focal point of the multi-million pound redevelopment of Water Row being taken forward by the council in partnership with Govan Housing Association. 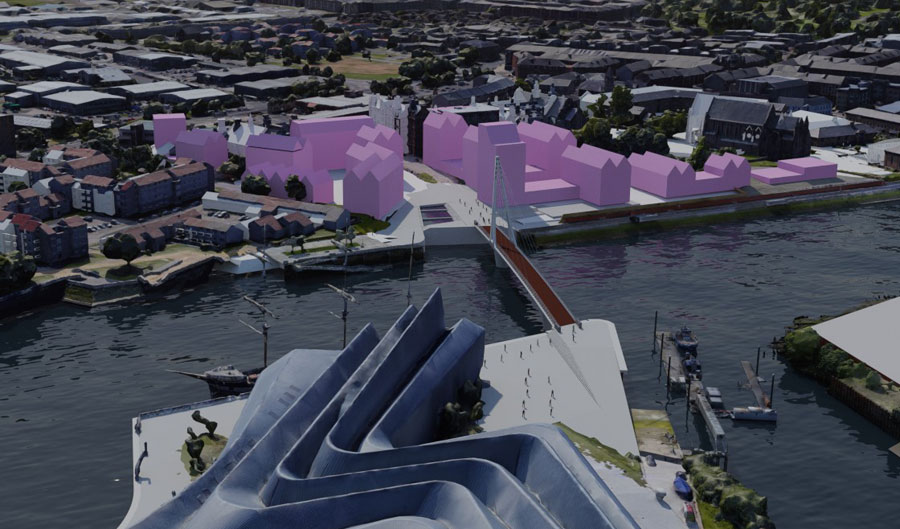 The bridge will also connect with a new footbridge across the River Kelvin which will be provided by Glasgow Harbour Limited as a condition of their proposed retail and leisure development. This will provide a new route to Partick Interchange, the fifth-busiest transport hub in Scotland. The bridge will also link to an improved walking/cycling route up Ferry Road/Bunhouse Road towards Partick Cross and the University Campus.

The bridge will be a cable-stayed swing bridge. The deck will be 115 metres long with a rotating central span of 68 metres, making it one of the largest opening footbridges in Europe.

The deck will be eight metres wide — a surface of six metres between parapets will provide enough space for use by pedestrians and cyclists. It will offer ‘step-free’ access making it usable for those in wheelchairs and pushing buggies.

The deck will be supported by a tower 28.5 metres high. The design of the tower seeks to evoke historical references such as the cranes of the Govan Shipyard while also reflecting the contemporary form of the Riverside Museum.

Headroom of nearly five metres above high water will allow smaller vessels to pass under the bridge when closed. It will take a few minutes to move to the open position — when open the bridge will provide a navigational channel of 50 metres maintaining access for larger vessels including the Waverley.

The length of the opening span, and a requirement to open in periods of high wind, means that the technical challenge at the Govan to Partick crossing is significant. Following consideration of a number of structural options a cable-stayed swing bridge was identified as the most elegant solution that was capable of meeting the technical requirements while enhancing local landmarks and maximising views of and from the bridge deck.

Its alignment to the east bank of the river respects the historic desire line which saw vessels cross the river up-stream of the River Kelvin. The extended quay wall ensures that the bridge does not obscure views to the museum frontage of the Riverside Museum.

Glasgow City Council secured just under £114million of City Deal funding for the Waterfront and West End Innovation Quarter project. The project area extends west from Custom House Quay along the river corridor through Govan to the area around the Queen Elizabeth University Hospital (QEUH) and to the north to include the University of Glasgow campus.

It is an area which is home to major economic assets such as the University of Glasgow, the Digital Media Quarter at Pacific Quay, the Scottish Events Campus and the new QEUH. Yet despite the presence of these anchor institutions, it is also home to areas affected by what the Scottish Government defines as ‘deep-rooted deprivation’ particularly on the south bank of the river around Govan. An analysis of economic data demonstrates that the river represents a significant barrier — north of the river is characterised by high employment, incomes and an over-heating property market, with the south of the river affected by relative deprivation, market failure and large tracts of vacant and derelict land.

The construction of the footbridge between Govan and Partick is one of a range of interventions that the council and its partners will deliver in order to build on the economic assets that exist in the area to foster the development of an Innovation Quarter. It will form part of a new active travel route from the University Campus on the north bank to QEUH on the south. The proposed bridge is already acting as a catalyst for development with the University of Glasgow exploring the creation of a new Waterfront Innovation Campus on vacant and derelict land to the north QEUH, as well as the Glasgow Riverside Innovation District on both banks of the Clyde.

The bridge will also help establish a cross-river Cultural Quarter linking key assets such as the Riverside Museum and Kelvingrove Art Gallery and Museum on or close to the North Bank to Govan Old Parish Church and Fairfield Heritage Centre on or close to the South Bank.