GO-Ahead Given For High-Rise Riverfront Aparthotel With Rooftop Restaurant

PERMISSION has been given for an ‘iconic’  20-storey hotel development beside the Clyde in Glasgow City Centre.

Council officials approved the application by CitiHome Ltd to demolish a three-storey building at 8 Dixon Street, at Clyde Street, and build a 204-bedroom aparthotel, with a roof-top restaurant, glass-floored balcony 20 floors up plus a ground floor restaurant, artisan bakery, cafe and gym. 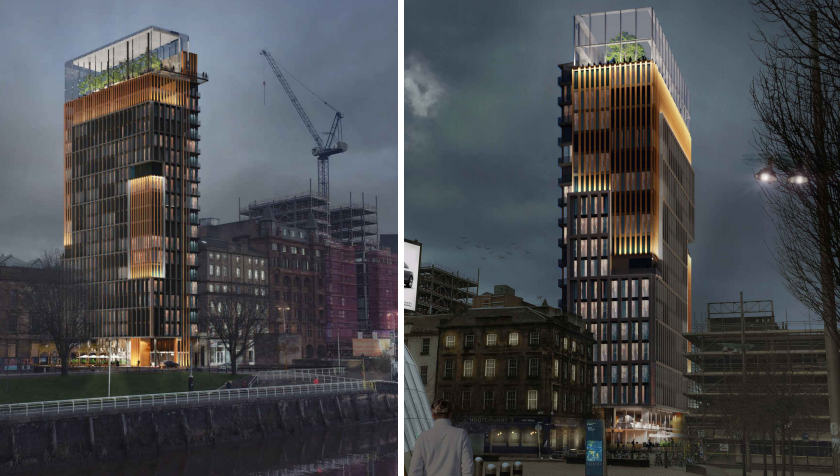 How the building is expected to look from, left, the Clyde, and, right, St Enoch Square

A report by the planning department states: “The riverfront is a developing area, home to a variety of building styles, both existing and proposed. The Planning Authority considers that the applicants are proposing a purposefully distinctive building, of a suitably civic scale, justified by the prominent site position.” 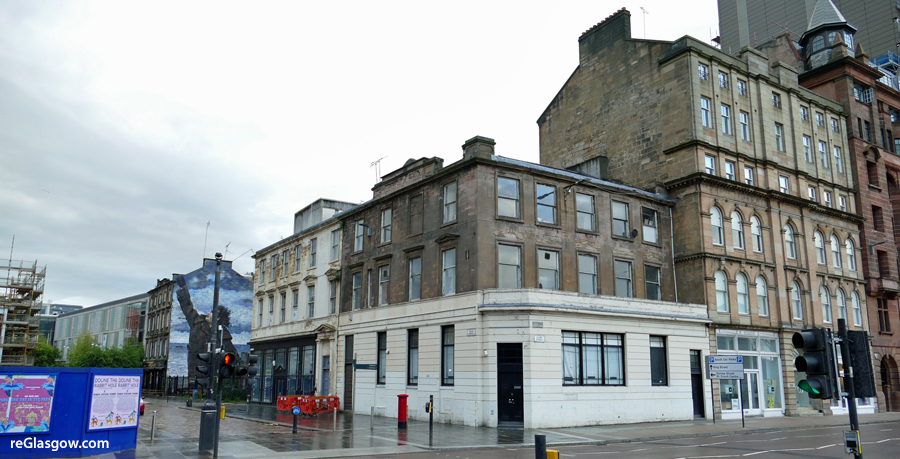 It continues: “Public access is promoted throughout with the provision of a double-height rooftop restaurant / bar which would provide unrivalled views across the city. The proposed rooftop would also incorporate a cantilevered sky-deck, which would be a unique experience within the city. At ground floor level, an active frontage would create a vibrant and safe environment around the base of the building.

“The provision of a new serviced apartment development will address the existing shortfall in such accommodation and support wider aims such as tourism and conferencing within the City Centre. In addition it will support local businesses and create jobs and opportunities for Glasgow’s residents.

Historic Environment Scotland objected to the building saying it would have a detrimental impact on the setting of the A-listed St Enoch Square Underground station.

However council planners responded: “It is considered that, rather than detracting from the setting of any nearby listed buildings, or indeed the Central Conservation Area itself, that the proposed development would be a welcome and stimulating addition to the city.

“The proposed development would offer a more positive presence to Buchanan Street with a high level of design interest when viewed from all vantage points.”

Scottish Ministers said they would no intervene in the matter, paving the way for Glasgow City Council to give consent.

A statement on behalf of the developers, included with the application, explained: “Throughout the design development process, emphasis has been continuously placed on the need for the proposed building to express itself as both a daytime and a night-time building.

“In other words, it must function 24/7 as an icon for both the city and the company so that it will have high visibility and yet, at the same time, be understood, purely and simply, as a Glasgow building with new and specially interesting characteristics.

“Among these features there will be a glass roof-top restaurant where diners can admire the lively ‘City Lights’ threading through the city as well as shimmering silently in the dark flowing river Clyde.”

It adds: “To augment the uniqueness and elegance of the building it is proposed to have a glass-floored cantilevered balcony where diners can sip an evening cocktail while waiting to be seated at their table, chat a little or simply and quietly admire the City stretched out below their feet.

“This architectural device could stimulate interest among people and encourage them to come down from Buchanan Street to see the building, have coffee and cake during the day or a candlelit dinner in the evening and become, perhaps, a little curious about what the experience of standing on a transparent glass floor will be.”

The statement continues: “The building will function as an enabler/facilitator to help the City achieve its planning objectives of reintroducing the populace to the Clyde and by doing so reintegrate the river with the City in an entirely new role i.e. a unique visitor attraction.

“The building will be much more than a sharp contemporary piece of modern architecture; it will have laid down its credentials as an urban node point, a significant urban marker but, even more than that, it will enable some of the City’s planned objectives to become real possibilities.”

“The building will also become an integral part of a number of tall neighbouring buildings either presently under construction or about to be built. This range of tall buildings will clearly alter the character of the Broomielaw but, in a sharply contemporary way which chimes well with the age we live in.”