TURNING a historic Glasgow City Centre building into a giant advertising space may have helped to save it from demolition.

Just three years ago plans were lodged to knock down the prominent B-listed former commercial premises on Argyle Street at Miller Street and build student accommodation.

A report at the time concluded, after intrusive investigation, that the building had “come to the end of its useful life”, was “incapable of repair short of complete dismantle/reconstruction” and should “therefore be demolished”.

That application was later withdrawn, the building changed owners, and now a new proposal to convert the upper floors into 21 flats has been drawn up. Retail space would continue in the ground floor and basement with three flats on each of the remaining levels. 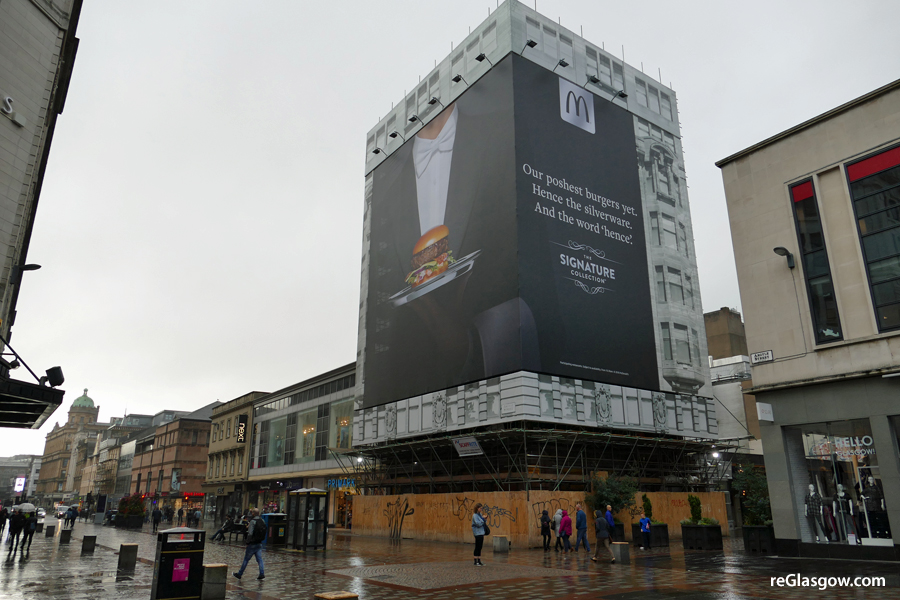 A document submitted to Glasgow City Council by ZM Architecture explaining the new development states: “In 2015, the previous owners proposed to demolish the building and the justification for this was based on detailed findings and a structural /economic assessment of the repair works needed to deal with a corroded structural frame.

“The scaffold that has been erected around the building for advertising…has allowed our conservation team with engineers David Narro Associates , to make a detailed independent assessment of the issues highlighted and the conclusion we are reaching is more favourable and that the building can be saved.

“Scaffold access has allowed tests to be carried out, a full stone fabric condition survey and structural frame opening up. This work is ongoing and a detailed stone enabling contract is to be organised so that full refurbishment of the façade can be undertaken with known risks and methods for stone replacement and treatment for frame conversion.

“This is a slow but methodical process and means that we will be applying to extend the approved scaffold period to facilitate further works. The project is now noted on the register for funding with Glasgow City Heritage Trust and we intend to tender the stone repair works once the scope is fully ascertained after further investigations.”

Images showing how the building would alter under the proposals

The application documents continue: “The applicant, Wilton Argyle Ltd , based in Italian Centre, Glasgow are the owner of the property. They are committed to repairing and preserving the building through pragmatic and careful conservation-based intervention. Wilton Argyle Ltd have a track record of delivering successful projects to meet market opportunity and demand.”

Remodelling of the roof profile is proposed under the new scheme. This involves a raised single storey element being added at the eighth floor for equipment space, and an extended upper level to create a ‘penthouse residential unit’. The front section of roof would become a private terrace “framed by a new formal elevation giving the building a new terminating storey.”

A new rear element in a contemporary style would replace the existing brick rear section which is in poor structural condition.

A number of alternative uses were explored involving aparthotel and studio offices, but it was concluded that residential was the most deliverable option and favourable for the market.

The building was originally designed for use as an office and warehousing and dates from 1905. It is described as being of American derivation and has been on the Buildings at Risk register for some time.

Change-of-use and listed building applications will be considered by city planners.