AN innovative plan to create a solar power centre at a Glasgow city car park has secured nearly £1million from a European Commission fund.

The £940,000 award from EU Horizon 2020 will go towards building a large canopy of solar panels above the council-owned car park on Duke Street. The panels will mainly be used to power the car park — including ten charging points for electric vehicles. 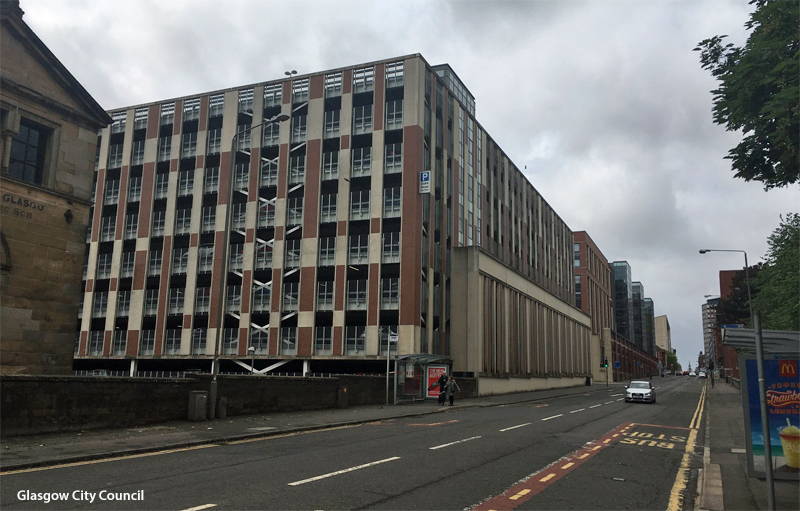 The car park scheme is part of a wider initiative to develop a sustainable energy district along a section of George Street and Duke Street. It involves Tennent’s Brewery, University of Strathclyde, Scottish Power, Siemens, Transport Scotland, Wheatley Group and Glasgow City Council.

Money from the award will also be used to install a 500 kilowatt battery and a sophisticated controller.  This equipment will allow for storage and sharing of the energy captured via the solar panels within the district.

Plans are also in place to instal up to seven ‘intelligent’ lighting columns within the city centre that can also be used for electric vehicle charging.

It is intended that the solar panel canopy, which will cover the equivalent of more than 130 car parking spaces, will be fully operational by October 2019.

In the longer term it is also hoped that any excess power generated by the solar panels can be transferred to the three housing association high rises at neighbouring Drygate.

A scheme is also being put in place to install a smaller battery next to the Drygate flats which will store energy taken from the National Grid when power is generated cheaply.

Councillor Anna Richardson, the council’s City Convener for Sustainability and Carbon Reduction, hailed the car park project as a key component in the ‘smart street’ emerging along the George Street-Duke Street corridor.

She said: “This is an exciting and dynamic project that can take Glasgow closer to our goal of becoming the most sustainable city in Europe. Horizon 2020 funding is only ever awarded for projects that can demonstrate innovation that has the potential to be picked up and used elsewhere.

“We hope the Duke Street scheme will eventually be replicated on car parks across the city, but we also hope that other cities across Europe can learn from what’s happening in Glasgow. Developing robust relationships between all the organisations involved will be the key to the success of the Duke Street car park project.

“It is far more efficient and cost-effective to gather and deliver energy locally and this project can show us a way to tackle fuel poverty. Sustainable energy districts have the potential to transform how we power Glasgow.”

As a whole, the Glasgow consortium will receive more than £3million from the EU to develop a suite of sustainable energy measures within the ‘smart street’ George Street-Duke Street corridor. Glasgow is also part of a wider consortium including Rotterdam in the Netherlands and Umea in Sweden. The consortium is known as Rotterdam, Umea and Glasgow: Generating Exemplar Demonstrations in Sustainable Energy Deployment, or RUGGEDISED for short.

Once the car park’s energy system is in the place, it will be subject to two years of monitoring and evaluation before wider learning is shared.

Other initiatives within the Glasgow project including looking at the viability of the City Chambers being linked to the University of Strathclyde’s currently-under-construction district heating system and also excess energy from the brewing process at Tennent’s Brewery contributing to the heating needs of the Drygate flats.