A PLAN to build townhouses on the remaining tennis courts at a south Glasgow bowling club has been submitted to the city council.

IAM Developments have applied to develop six semi-detached townhouses,each with three bedrooms, at Hillpark Bowling Club.  The properties would be on three tennis courts between Rostan Road and Tinto Road.

If permission is given, the club will have to give £150,000 from the proceeds towards improvements to tennis facilities at Newlands Park.

The club originally had six tennis courts but demand fell and three were sold for residential development in 2005. The money raised was invested in the remaining courts. 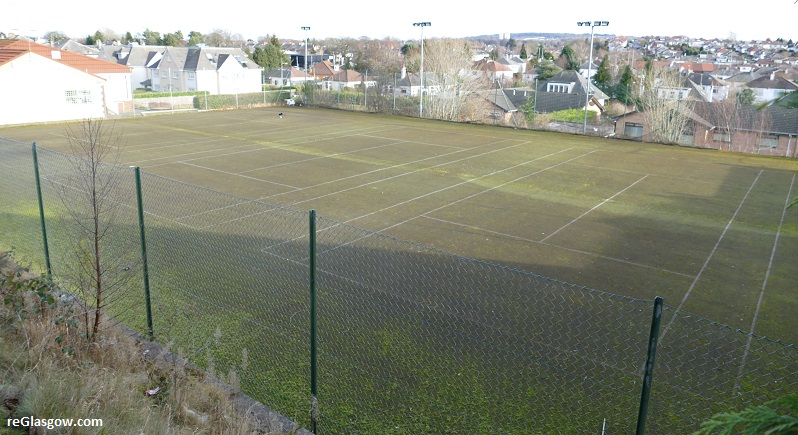 A statement submitted by Bennett Developments and Consulting on behalf of the club explains: “Since the deal with the house-builders, the club has sought to promote their facilities and to secure membership with little success, such that, at this time, the club only has funds to meet ongoing costs with nothing in reserve for repairs, maintenance or emergencies.

“Membership is still poor with few if any playing members. In reality the club now operates more as a social and community club for the local area, and in that role it is particularly successful and very popular, to the extent that it is now recognised as a valuable community resource, a view shared by the local elected members all of whom are hugely supportive of this proposal.

“Tennis courts are languishing in a state of disrepair with no likelihood of them ever being reinstated. The club has no funds to instigate a programme of repair and, in any event, there is no membership demand for the courts.”

SportScotland was consulted and it accepted that there was no “quantifiable demand” for the tennis courts at this location but that there was still a demand within this part of the city and that compensation would have to be paid — £50,000 for each court lost towards ongoing investment in tennis facilities at Newlands Park.

Any further money Hillpark Bowling Club gets from the sale of the land will be spent on ensuring the future of the club, in particular the community aspects of the facility.

The supporting statement continues: “It is accepted that the bowling club cannot afford to maintain the courts and that membership is low. It is also accepted that the clubhouse offers a valuable community facility and is the focus of numerous clubs, hosts meetings and small events and generally performs the role of a local community hall.

“To all intents and purposes the club is broke and only an injection of fresh capital will ensure the longevity of the club and its continued operation  as a much-needed and loved community facility.”